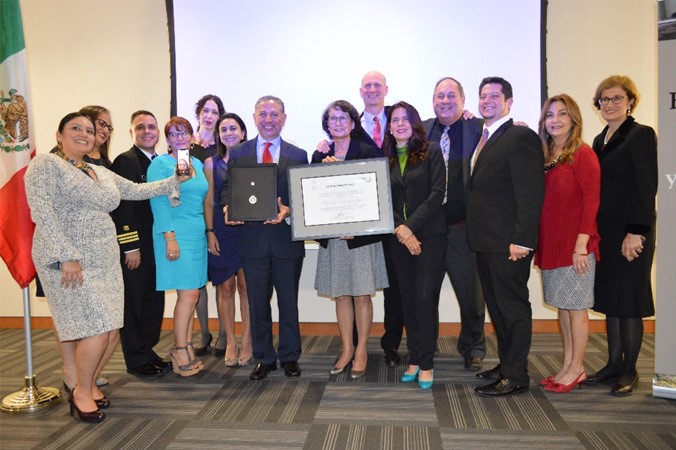 Cecilia Rosales, MD, MS, associate dean of Phoenix Programs at the University of Arizona Mel and Enid Zuckerman College of Public Health, and colleagues, accepted the Ohtli Award from the Mexican government in recognition of a national program to increase access to health services among low-income and immigrant Mexican populations in the United States.

Cecilia Rosales, MD, MS, associate dean of Phoenix Programs and professor of public health at the University of Arizona Mel and Enid Zuckerman College of Public Health, and members of the Advisory Board for the National Ventanillas de Salud (Health Windows) program, received the Ohtli Award from the Mexican Government for improving the quality of life for low-income and immigrant Mexican populations in the United States by improving access to basic preventive health services.

The highest recognition granted by the Mexican Government outside Mexico, the Ohtli Award is given to individuals and organizations who have aided, empowered or positively affected the lives of Mexican nationals in the United States and other countries. The ceremony was held at the Mexican Consulate in San Diego, Calif., in November.

Dr. Rosales is director of the Mobile Health Unit program in Maricopa and Pima counties, calling it an invaluable asset and a mechanism for reaching a large population of uninsured and underinsured individuals who are unaware and uninformed about available services.

“As a U.S.-Mexico border state and a border region with a high concentration of Latinos, it is important to work toward increasing access to care, health information, health education and referral services, to build a culture of health and healthy communities,” Dr. Rosales said.

The nine members of the VDS Advisory Board are specialists and leaders in health care and migrant health, representing different government, academic, private and international organizations with expertise in public health to guide the implementation of the VDS program.