With a basic understanding and visual que of the original model, our team set out to adapt the model to the research project. The two concepts of primary focus were cultural processes and social networks. For each concept, the small groups of the team discussed what the concept means and how it relates to health, identified questions to ask to measure it, and proposed activities participants could engage in to build or enhance the concept.

Social networks was understood to be the support system for a specific ethnicity within communities. The team believed that creating social networks would promote health among the being in a group that share common interests. An individual’s social network can consist of different people such as family members, friends or coworkers, and can formal (e.g. in workplace settings) or informal (e.g a walking group). In order to promote social networks among  participants, the team discussed the importance of teaching communication skills that address intergenerational, cultural and language difference. It was also important that any planned activities are culturally appropriate and respectful. Examples of social network promoting activities included support groups and encouraging participation in already established community events. We also discussed the importance of encouraging participants to re-engage and strengthen their existing social networks and making time to connection with the people they care about. 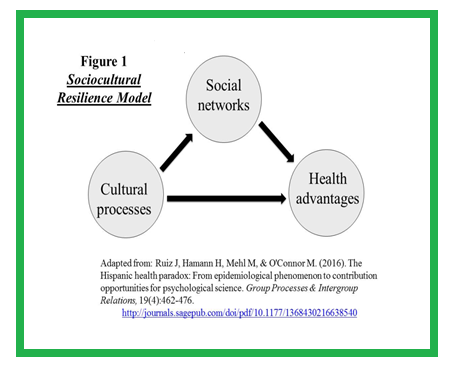 The concept of cultural processes  was understood to be the synergy between the beliefs, behaviors, religion, food, family, language , support and traditions that define a group of people. It also involves the ways that people adapt to culture and/or become a part of a culture.  Cultural processes also include a person’s daily activities, food they eat, how they communication and the beliefs and customs they practice. Activities that would promote cultural processes among participants would foster an exchange among people such as through intergenerational storytelling, sharing of food and artistic forms of expression such as dance.

Through the discussion on the social resilience model and is various concepts, the team also considered that there may be a bidirectional effect between the 3 concepts of the model in contrast to the unidirectional pathway represented in the original model.